Time for a new project. I've been meaning for quite a while to find a suitable opponent for my winter Germans I completed last year for Chain of Command. I was undecided by Americans and Soviets, eventually plumbing for the Soviets as they had plastic figures available.

So I got to work and immediately hit a buffer. The seperate weapons are a bugger to get them to look right, particularly the prone figure which I was using for the LMG and anti tank gun. I got so angry I abandoned the weapon option and bought metal figures from Crusader. Atleast the other figures went together ok.

So first squad is the only fully completed squad done so far. All Warlord plastics with the exception of the Junior leaders which are from Crusader miniatures.

Squads 2 and 3 are awaiting their LMGs which are currently on the painting table. 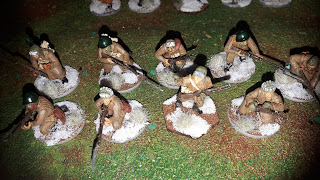 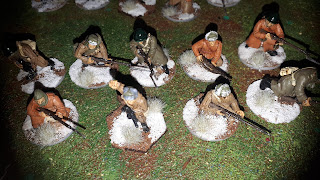 I do have a couple of support options also done. These are a 3 man tank killer team and the HMG team. The HMG is from Crusader. 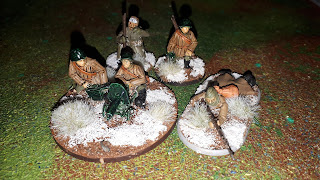 The last models completed so far are a Senior Leader and a sniper. 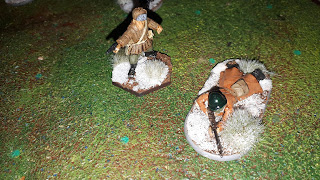 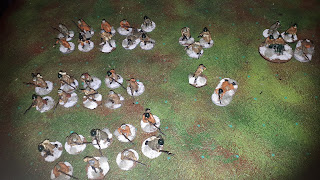 I've deliberately gone for a mix of shades on the coats. I want the platoon to look like they have seen plenty of action, running into the obvious supply difficulties.

Once I've completed the two LMGs I will have the basic platoon with two support options. I have a bunch of Artizan figures which can make up a 4th squad. A second Senior Leader, medic and a BT-7 fast tank are on order from Warlord. From the plastic box set there are enough spare figures to add to other options such as a mortar or HMG team (never enough crew in the blisters). I may even have another attempt at the anti tank gun.

Nicely done they will look good in action...👍

Thanks Matt. Can't wait to actually get a game in

A great start to your new army!

Nice work Neil.
I'm not a big fan of the plastic WWII from Warlord, I only played a couple of games with my British and there were a couple of broken Lee Enfields.
I think you made the right choice with the Crusader Miniatures stuff.

Cheers Paul. Also got some figures from Artizan and they are very nice