This is the last of my 'White' forces. I am hopeful to pick up a few more at the York show next weekend. I already have a few ideas of how I want to expand the force. Ideally I want 2 more infantry companies, probably one of the volunteer units to add a bit of colour. There is also the option of one of the officer unots - Markov in their black uniforms that seem to be a must for most white forces.

Anyway here are the additions I've completed. First up is the HMG team from Copplestone castings. I kept these in the colours of the Izhevsk regiment. 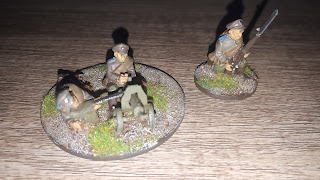 Next up is an artillery piece to add a bit more firepower. This model is also from Copplestone castings. It was part of the bundle I picked up from Colonel Bills. The uniforms are just pretty generic for the gunners. I'm also not sure why I painted the gun carriage dark brown. I had been looking at various pictures which showed the wheel spokes as a light brown, different to the rest of the carriage. Still pretty happy with it and looks different enough from the gun in my 'Reds' collection. 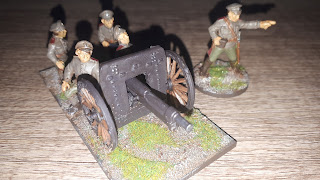 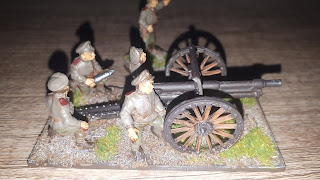 So here is the collection so far. As can be seen it is seriously short of manpower compared to my Bolsheviks. Looks about outnumbered 5 to 1. Just the two companies with support weapons. 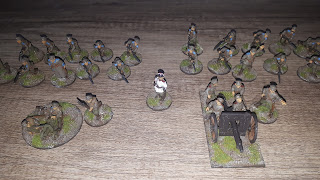 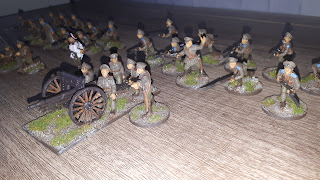 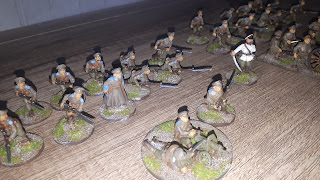 Well as I ponder new acquisitions I can make a start on the new project for this year.

It's been a few months since we had a run out with the Mech.s As the club was moving rooms it seemed a perfect opportunity to play a game as we only needed a few figures. So Dave set up a quick game with my Praetors looking to ambush a Greywolves patrol.

As I got the first turn I moved my APCs and tanks into the cover of the buildings, meanwhile my light mech swung off to the right. The Greywolves sent 2 of their mechs to intercept. Unfortunately Dave failed a move roll, isolating one of his mechs. 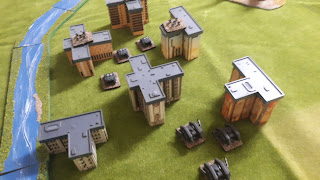 This allowed my light mech to rapidly close in, firing on the move. Combined with support from my heavier mechs, one of the Greywolf mechs went up in flames. They responded by demolishing one of the buildings, taking out one of my infantry teams. 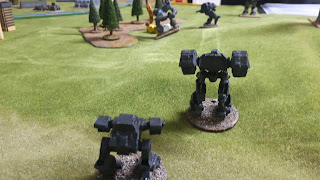 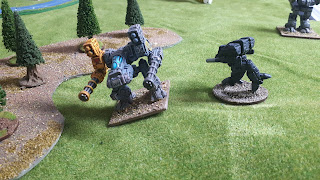 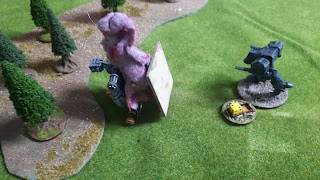 With one mech down, my heavies quickly closed on the enemy. The dice gods were definitely in my favour as more heavy fire took out a second mech. One of the Greywolves did manage to get its guns on my light mech, inflicting some damage and blinding the pilot for a turn. Unfortunately though the game was quickly up, in one turn my remaining mechs then inflicted crippling damage on the remaining two mechs and it was game over. All dopne in an hour 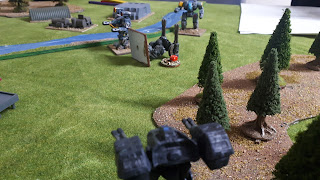 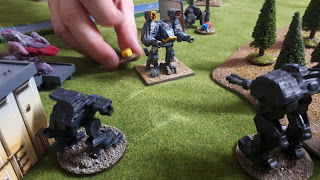 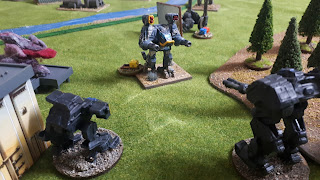 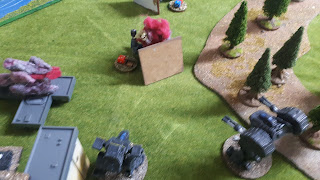 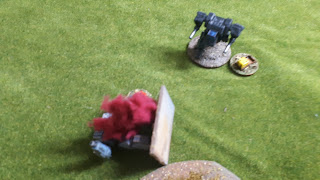 Well next week it willbe back to tricorns.

I finally got around to basing the second company of the Izhevsk rifle battalion. Just like the 1st company the troopers are all from Minifigs and the officer is from Copplestone castings. I also completed another officer in a more flamboyant white uniform. Just like the idea of him standing out from the rest. 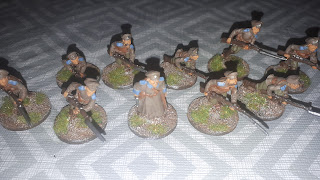 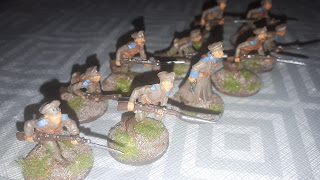 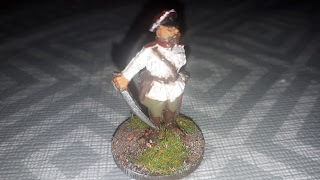 I do have 2 spare figures remaining, the idea being I will use these for one of the more colourful officer units. I think I might try a couple of packs from the Empress range to bring them up to 10 figures. Hopefully they bring the range to the York show. In the meantime I have the HMG and artillery undercoated and hope to make a start on them in the coming days.

Just before Christmas I picked up a couple of packs of Copplestone White Russians from Colonel Bills. They were made up of some officers, HMG team and artillery, but no infantry. So I decided to make a speculative purchase from Minifigs for some of their Russian infantry. I was wanting something a little different from the Copplestone figures which make up my Red forces.

The poses from Minifigs are much more dynamic than Copplestone. Though the figures are slender, it is fine mixing in the odd Cooplestone figure, such as an officer. I wouldn't add a single Minifig to a Copplestone unit as he would look out of place.

So the 1st company from the Izhevsk Rifle battalion. The coat colours are a little greener than I would have liked, but does help them look different to my Boshevik units. As can be seen I have added one of the Copplestone figures to lead the unit. 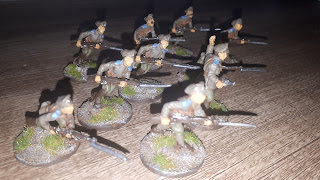 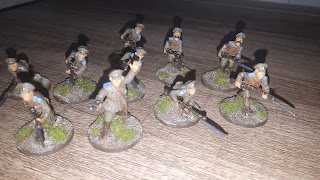 I now have the 2nd company nearing completion, then I can start on the HMG and artillery.

So Thursday at the club a couple of the lads wanted to try out the Hex based rules I have for the WSS / GNW. I willingly obliged but couldn't decide which theatre to go for, It ended up a mix as the first boxes I managed to retrieve from the shed were the French and Russians. So a bit of a cross over. As the players were all new to the rules, I went for a simple encounter battle. This allowed the players to get used to the mechanics.

As it was a training battle I didn't make many notes of what actually happened. Simple to say my poor Russian dragoons were rather mauled by rampaging Bavarian Cuirassiers. However my infantry were able to hold their own against the superior quality Bavarian and Irish infantry. Over on the left flank, Neil B and Mitch came to blows, Mitch slowly driving the Russian Dragoons back while their infantry fought each other to a stand still.

After this I forgot to take any more pictures. Overall a fun game. The mechanics are simple enough for players to quickly pick up and easy enough for me to remember since I last played them pre-covid

Last of the Turks

I've finally completed the last of my WW1 Turks from Copplestone Castings. They add a little firepower and leadership to the 40 riflemen already completed.
For the 2 HMG teams I added 1 of the officers, that way I can seperate them into two 3-man teams. 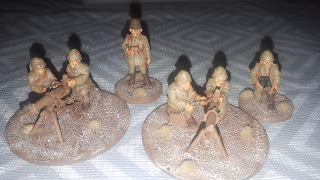 Lastly are the remaining 3 officers to lead the rest of the troops. 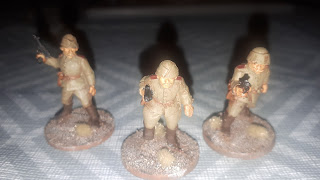 I've enjoyed painting these and quite fancy picking up a few more and maybe an artillery piece as well. With the York show approaching I may try out the Woodbine design range from Gripping Beast for a bit of variety. Now to try and finish the first unit of Whites for the RCW.
Posted by Neil Scott at 13:58 10 comments:

Not  that my British forces really needed reinforcing, I couldn't help but add a company of Sikh soldiers. This would help give the force a more Imperial feel.  The 10 figures below are all from Copplestone castings and were nice and easy to paint up. 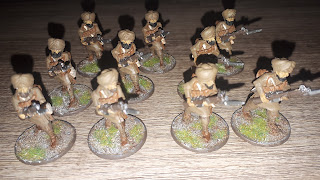 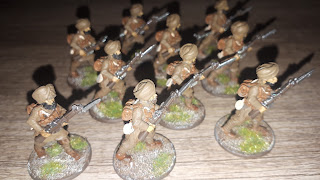 Hopefully it is not too long before they get onto the wargames table. I have also been making a start on some White Russians. I've picked up an artillery piece, officers and HMG team from Colonel Bills, they are all Copplestone castings. I also purchased some WW1 Russian infantry from mini-figs, enough for 2 companies. They are slightly slimmer than the Copplestone figures,but mix in fine. They also add a little variety. Hopefully get some of them undercoated tomorrow and I can make a start.

Labels: 28mm, Back of Beyond, RCW
Older Posts Home
Subscribe to: Posts (Atom)