Lord of the Rings Elven warriors

Well with my current enthusiasm for all things Tolkien. It was time to add some more Elves so I can fight some of the Battles of the first Age.

The figures are mainly plastic with a few metal mixed in. They were produced by GW based on the Peter Jackson films. Not quite how I imagine them, but I somehow have 40 of them to paint up. It will be enough to make a division, then I can start on the Oathmark figures for the second division. 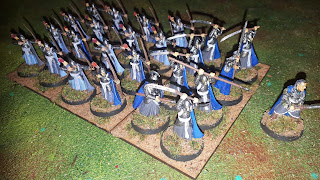 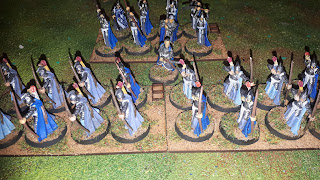 I decided to go with a mix of blue and greys. I wanted a slightly uniform look them. The next 2 units are both of swordsmen. I have spare figures of Elrond and Gil-galed to act as leaders.
Posted by Neil Scott at 13:42