As part of a short trip away I managed a quick visit to the battlefield of Otterburn. Fought between the Scots, under the Earls of Douglas and Moray against the English under Henry 'Hotspur' Percy and his brother Sir Ralph Percy. It was not to be a good day for the English. Henry lived up to his nickname and led a rash attack against the Scottish camp. He was so confident that he attacked at dusk, despite the long march up from Newcastle. Many of his tired and disorganised troops were still making their way up through Otterburn. Unfortunately for the English, despite the speed of their attack. The Earl of Moray led a superb flanking attack that was screened by woods and dead ground, unseen from the English position. Despite the death of the Earl of Douglas during the battle, both Percies were captured and the defeated English retreated back towards Newcastle.

The battle is currently marked by Percy's cross. There are a few plaques on display describing the battle for the visitor as well as acouple of picnic benches. 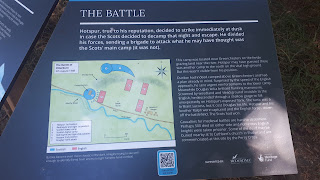 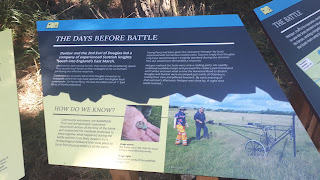 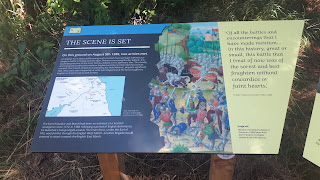 Well that's another Battlefield I can cross off my list. It does get me thinking about putting some armies together for a little border skirmishing.

I really enjoy seeing these battlefield walks by fellow wargamers. Having recently fought a few of the actions in this war, Otterburn might be another to add to My List.

Cheers Jonathan, the beauty of Northumberland is plenty of battlefields, just need to get out to see them

The info boards did look rather new. A great little battlefield

You should definitely consider getting some figures for Border skirmishes, Scotty. Last time I was at Otterburn, it was during my exceptionally brief association with the British army, circa April 1985,!

It has definitely piqued my interest