It's the start of another little side project. Being a Northumbrian the Border Reivers, their history and background has always inspired me. So now it was time to actually collect enough figures to get them on the gaming table.

At the aptly named Border Reiver show in Newcastle I picked up the first figures for a family. A quick visit to the Hoka Hey stand to pick up a pack of mounted Reivers and their dismounted equivalent. Then it was a visit to Reiver castings to pick up a couple of packs from them. These along with a free Warden figure were a good starting point.

So first up is the Reiver castings. A hound master with a couple of hounds as well as a pack of mixed weaponed reivers.


Not bad figures. They are a fraction smaller than the Hoka Hey/Graven Images figures, but definitely of a slimmer build.

Next up is 3 of the mounted figures from Hoka hey with their foot equivalent. These are hefty figures and were a joy to paint. The horses though are not my favourite. 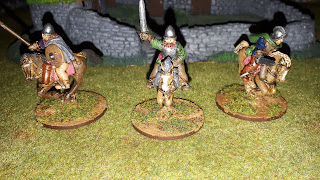 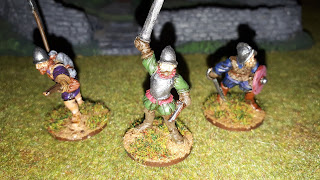 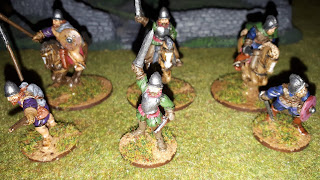 Lastly is an old foam building that has been in my collection for a very long time. Probably more for the Highlands  of Scotland, but will see service as an isolated cottage in the borders. 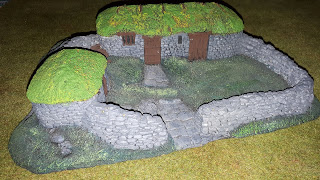 The turf roof looks very bright in the photo, but is actually much darker.

Next I have the last 3 mounted figures to complete. I also ordered a couple of packs from TAG which have just arrived, more compatible with the Reiver castings. Not a bad start. I will have to add some civilians, livestock I have plenty of. I also might pick up a Bastle House, I have seen one in MDF but it has a staircase?? These were a later addition as most Bastle houses used a ladder to the upper entrance. I may just build one myself with foamcore.

For rules, I have the Osprey En Garde rules which look suitable for the period. Will look to give them a try in the next couple of weeks.
Posted by Neil Scott at 13:33

Nice work, I have looked at these figures which I think are great for a while and a Reiver project with our geographical connections, perhaps one day ? Sadly missed Reiver show with other challenges that week hopefully will get to battleground again this year 🙂

Its been one of those periods I've always fancied, but never got around to

Those are really nicely done Neil!