After much mulling over possible new 6projects I decided instead, to re start an old project. The Crimean War in 10mm. I've had some painted Russian troops sitting in a box for a number of years. I was never happy with the basing. I had used Fire and Fury bases as these were the intended rules, but when ranked up they just didn't look right. I decided to increase the base depth from 20 to 25mm and double the number if figures to a base. I feel these look much better. The only draw back is it's left me with over 60 figures without command figures.

It was then a chat with Dave who reminded me that Pendraken can cast figures up on request, so worth checking out. I duly did and Leon, the nice chap at Pendraken agreed to cast up the command figures for me. So order in with a few extras.

So here are the figures re based. 8 battalions completed. The extra command will get me another 7 battalions. 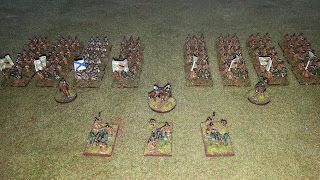 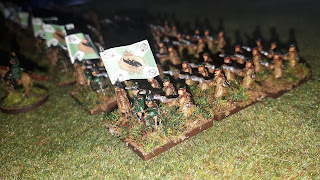 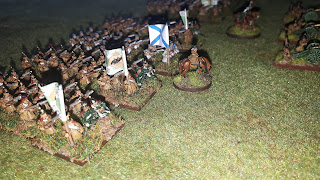 Now for rules. I'm contemplating using the General de Armee rules Dan Brown as a starting point as the tactics hadn't changed much. May have to adjust some of the firing ranges.
Posted by Neil Scott at 08:41

Think you are right, buti see this as a long term project and 10mm are cost effective

Get in Scotty, put the pressure on Neal to do his British! looking forward to having a game.